Dji has a huge now.  This is how you get into the aerial quadcopter scene. With this one, it is small enough to use indoors. I’m truly excited they made the DJI Spark. 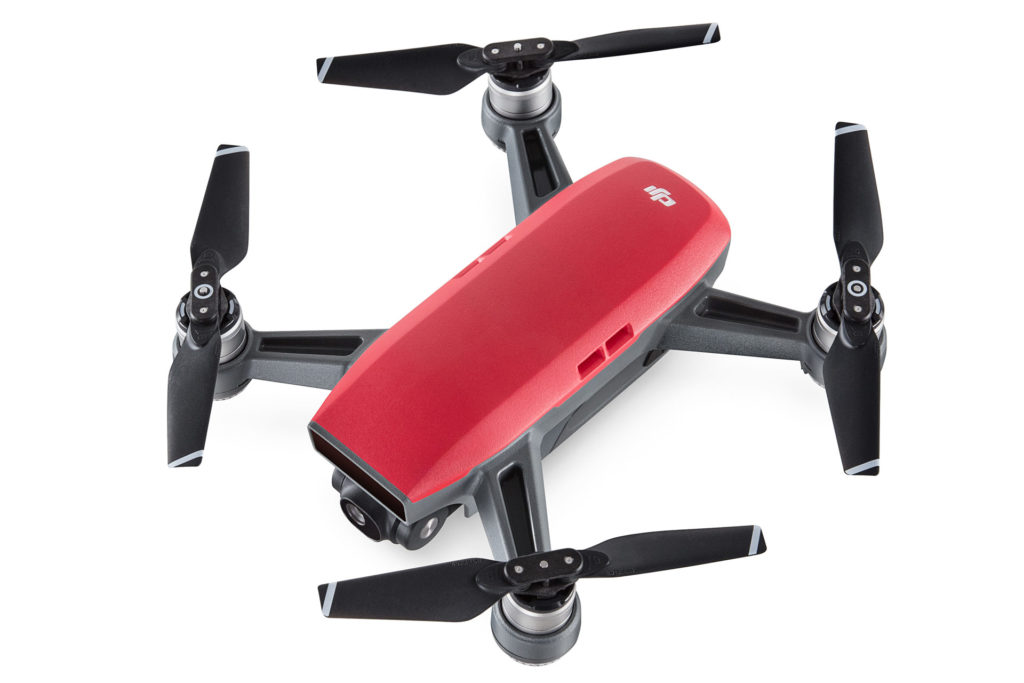 This particular drone is filling a niche for the home enthusiast. This is a great starter, mostly because it has a lot of it is automated. You can put together a quick cinematic video with ease of some hand gestures.

If you have not noticed, this guy is pretty small. It is even smaller than the DJI Mavic, which came out Oct 2016. Most people were happy with the size of the DJI Mavic, but the DJI Spark fits the role of being super portable. The tracking mode is nice for those that want to get pictures that require space longer than a selfie stick can provide.

HOW IT COMPARES TO THE DJI MAVIC:

As I mentioned the DJI Spark is smaller than the DJI Mavic. Interestingly enough when folded the DJI Mavic and DJI Spark are about the same size. Well, at least until you see it from the side.

The DJI Mavic is still a little larger in height. If you are careful you can put the DJI Spark in a small bag.

When we look at the weight the DJI Spark is about 41% the weight of the DJI Mavic with battery. Again putting it in a small bag isn’t too crazy. That batteries alone are about the same percentage between each other.

The battery has a rated flight time of 16 minutes. But in the real world depending on how hard you push it you might only get 10-14 minutes. It is 1480mAh, so while it is not huge you can charge is pretty easy with a larger battery pack.

The battery also housing the functions for pairing, battery status. Pretty much where the brain is. You will get more than 5 flights out of a full remote battery charge.

I mentioned earlier that folded up the DJI Spark is pretty small. The props are replaceable if you end up crashing hard. But this isn’t designed to be a racer so I hope you don’t crash it much.

The arms are fixed so you have to be careful of that too. They make guards for the props to protect them but nothing is perfect. Props usually don’t cost too much, but getting an arm fixed might be a real pain.

One thing that attracts people to the DJI Spark is that you can use your smartphone to control it. They actually make the remote control optional with a separate bundle that costs more. The benefit of the actual remote is that the range is around 2,000m versus on the smartphone might only get 100m of range. At 2000m you can get lost, so be careful.

If you are familiar with the DJI Mavic remote, the DJI Spark remote is similar but not as feature rich. The most noticeable difference is the lack of a full screen on the DJI Spark remote. On both the remote and smartphone you are able to single button switch to photo mode to take pictures. But you can’t take pictures at the same time as you are taking videos. When using the smartphone it connects wirelessly so that makes it a little tidier.

The reason why you only get 100m out of the smartphone is because it is connecting through a short range radio signal. Where the remote is governed by a long range signal which will get you closer to 2000m. The live video will come over by way of the DJI GO app and the app also has some controls. One of them is a simple take-off.

The DJI Spark has a cool feature where it can hover in one spot over the ground. For reason not so obvious it has a hard tracking over water. Pretty much anything reflective or worse, something moving.

Once it gets higher in the air the other sensor like GPS start to take over. The DJI Spark only has a 2-axis gimbal but don’t worry you will still be able to get some amazing shots. You can move the camera with either the remote or your smartphone. Another nice feature is automatic pitch tracking. When the DJI Spark moves forward the gimbal will move to keep everything in frame.

This drone has a few different flight modes. A few of them are called Intelligent Flight Modes which sort of let you cheat when you don’t have a solid grasp of flying. Here are the modes you will get with this drone:

At the time of this no other DJI models that have these features. But there are rumors of adding these in a future update. It would be nice to have some of the larger models have some more autonomy.

Another cool feature is that if it loses signal it can come back to a home point that is set during take-off. You are probably wondering what happens if you lose signal on the other side of a building. Don’t worry it won’t just go straight into the building it will use it’s sensors to avoid obstacles. This only works so well. It will try to go through a chain link fence since it can’t make out the thin wiry fence. So for anything thin it will have a hard time detecting.

It is to be said that the avoidance system only works when the drone is moving forward. Going  up or backwards you will run the risk of running into something if you are not paying attention. Drones like the larger DJI Phantom 4 Pro do have the all-around avoidance sensors. Nothing is perfect so be careful where you fly and what path it might need to take to get back to you.

So, one of the features that most people will buy this for is the ability to use gestures. You don’t need a remote at all to use this. It has a simple take-off mechanism where you just hold out the DJI Spark and double tap the back. From there you can use several hand gestures to control it.

It is kind of a gimmick, but a cool one none the less. It doesn’t always work but it is something neato to show your friends. Personally I would prefer to use the remote, the distance it a huge reason for that. But it works well for pictures you don’t want to have the remote in your hand. You have seen those pictures.

So let’s say you are flying your DJI Spark over the Hoover Dam. Oh no you forgot to charge the battery. It will slowly fall until the battery completely fails and crashes into the Colorado River.

Check out the rest of the technology HERE!